The words robot and drone may conjure up images of a sleek, austere future, but some of the most compelling use cases for the machines involve situations that are too dangerous, or just plain messy, for a human to handle.

To wit, two recent grads of the U.S. Air Force Academy have patented a drone that climbs into a building through its water or sewage pipes. The inventors, Kyle Fitle and David Carte, described the vehicle to the Washington Post as a way to facilitate communication between first responders and people trapped in damaged buildings in the wake of a natural disaster or explosion.

The motorized remote-controlled device, humbly named the Pipe Snake, consists of a rod that ejects diagonally backward a pair of arms with ends designed to grip to the wet sides of the pipe, locking in forward motion. The Pipe Snake then propels its central rod through the arms, retracts them, and starts the process again. It can move vertically up a pipe and navigate an elbow curve.

Fitle and Carte said future automated versions of the Pipe Snake will be able to transport small payloads, such as bandages and medications. But of course the upstream-swimming drone could also be used to deliver more than just human kindness: It could transport surveillance devices or small explosives. 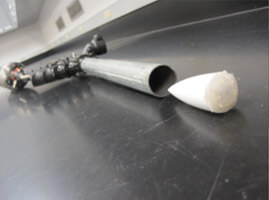 Air Force engineers Fitle and Carte have worked on a series of related devices. They’ve applied for a patent on something called an Adhesive Pellet Projectile (at left), an empty cone-shaped projectile that can hold infrared and audio sensors and sticks to a variety of surfaces. Fitle and Carte hope to use the devices together so that, for example, the Pipe Snake could transmit via a router carried by the Pellet if it loses contact with receptors held by first responders.

Drones and robots can perform an ever-growing number of tasks for people. We tend to focus on those that are most in keeping with visions of the future dominated by Big Brother or “Blade Runner.” Many applications for the technology, like the Pipe Snake, could advance that vision, but remote- and computer-powered devices also support better farming and help clean up industrial messes.

Cybersecurity as Realpolitik by Dan Geer